At The Dyrt, we share camping tips from our community of campers and campgrounds. With so many campers staying home, we continue to share this info so you can plan future camping trips across the U.S.

This guide to the North Shore of Lake Superior is brought to you by Tentsile. The makers of truly innovative tree-mounted, hanging tents that give you a one-of-a-kind camping experience.

The North Shore of Lake Superior is a popular road trip route in Minnesota. The North Shore route begins in Duluth and stretches along the lakeshore for 160 miles to the Canadian border, just north of Grand Portage. Lake Superior’s Highway 61 is a designated scenic byway and part of the Lake Superior Circle Tour. This circle tour is a 1,300-mile route that circumnavigates the entire lake—passing through Upper Michigan, Wisconsin, Minnesota, and Ontario, Canada. In addition to spectacular scenery, the routes offer much in terms of quaint shoreline towns and outdoor fun.

Duluth is a surprisingly lively city for as far north as it is. It’s actually the fourth largest city in Minnesota and the second largest city on Lake Superior, behind Thunder Bay, Ontario. Stop by the Lake Superior Maritime Visitor Center for a fantastic introduction to the history of the Great Lakes. Then you can take a tour of the SS William A. Irvin, a retired ore and iron freighter, which is now a museum, moored in the Duluth Harbor.

The Aerial Lift Bridge is by far the most popular landmark in Duluth. The bridge spans the Duluth Ship Canal, which connects Lake Superior to Duluth Harbor. It rises 135-feet in the air, multiple times per day, to allow gigantic ships to enter into the harbor. View the bridge in action from the Lakewalk in Canal Park. Or get outside of the city a bit more and check out some of the Lake Superior campgrounds just outside of Duluth.

About 15 miles north of Duluth, the small town of Knife River is a fishing haven. Knife River has a long history of commercial fishing and the Knife River is the state’s top steelhead trout stream. To sample the goods, head to Russ Kendall’s Smoke House, a Minnesota institution. Kendall family members have been smoking fish in Knife River for four generations and have absolutely perfected their technique for sugar-cured smoked salmon and smoked lake trout. The Knife River Campground is a convenient spot to stay near the Knife River. It is also close to the delectable handmade treats at the Great Lakes Candy Kitchen. 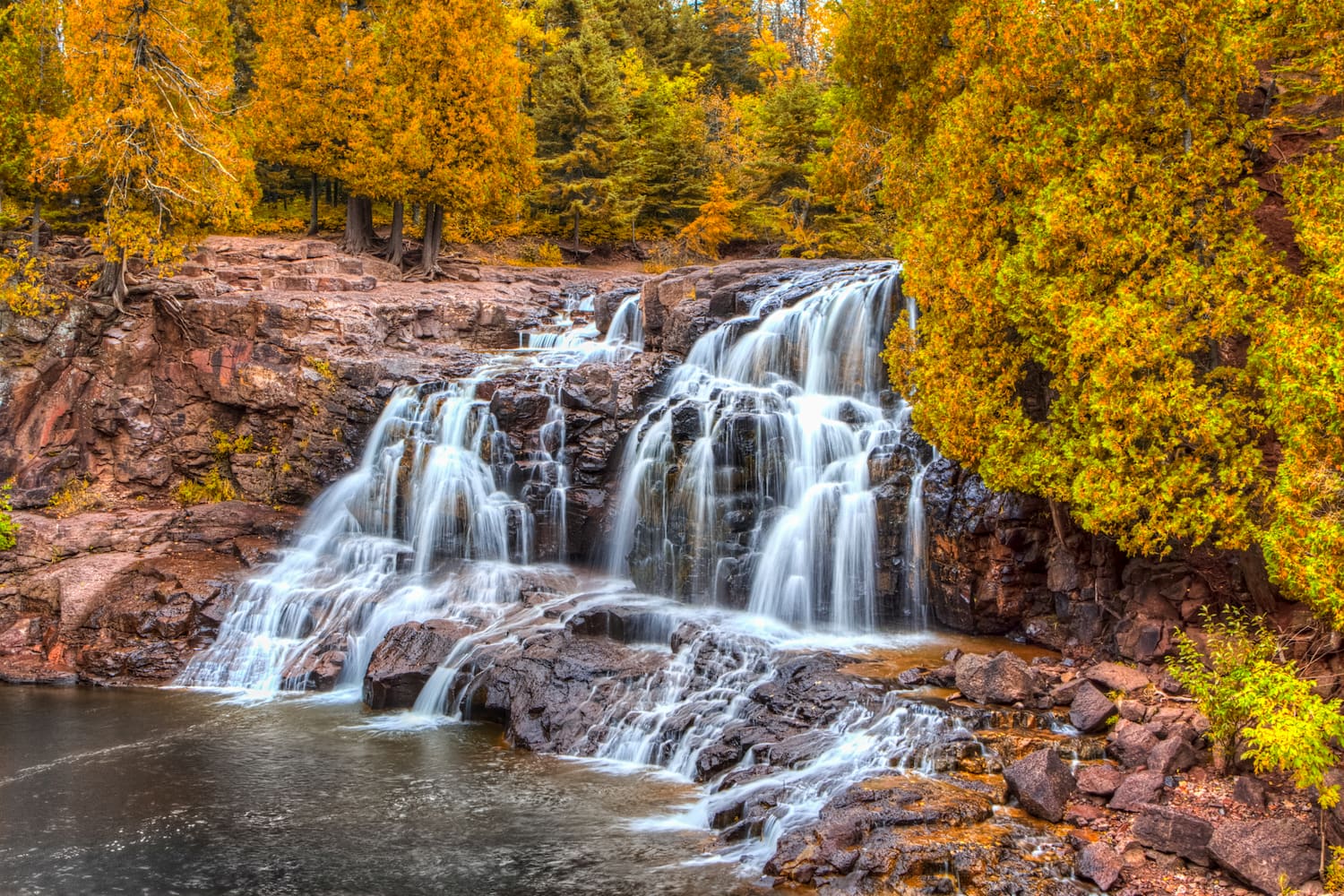 Just north of Gooseberry Falls State Park, a yellow brick lighthouse is perched high atop a 130-foot sheer cliff overlooking the lake. Built in 1920 and in operation until 1969, the Split Rock Lighthouse is one of the most iconic images of the North Shore. Guided tours of the lighthouse are offered multiple times per day from May through October. Plus, the nearby Split Rock Lighthouse State Park offers camping, trails, beaches, and fishing opportunities for visitors.

Listen to the Singing Stones at Iona’s Beach 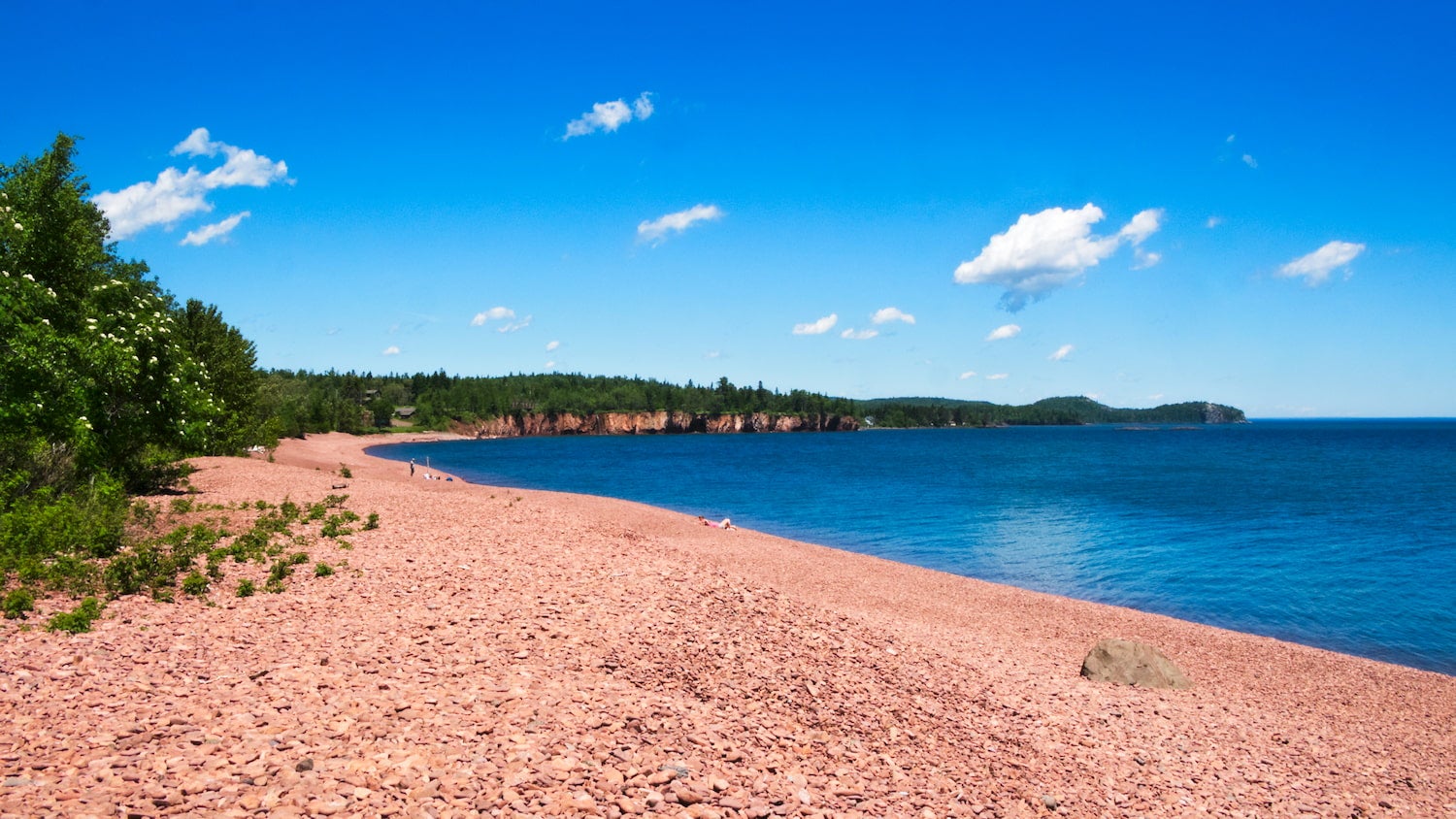 Iona’s Beach is a unique pink pebble beach along the North Shore of Lake Superior—midway between Gooseberry Falls and the Split Rock Lighthouse. As waves rush over the pink rhyolite pebbles, they make a curious tinkling sound as the water recedes and the rocks resettle. A segment of the Gitchi Gami State Trail, a multi-use paved trail which will eventually connect Two Harbors to Grand Marais, passes directly behind the beach.

Tettegouche State Park offers some of the most thrilling views of the North Shore of Lake Superior. The trail to Shovel Point is arguably the best hike along the North Shore. It follows the cliff’s edge from the visitor center to a stunning viewpoint of the lake. The park is also home to one of the highest waterfalls in the state, 22 miles of hiking trails, several rock climbing routes, and even groomed cross-country ski trails during the winter months. 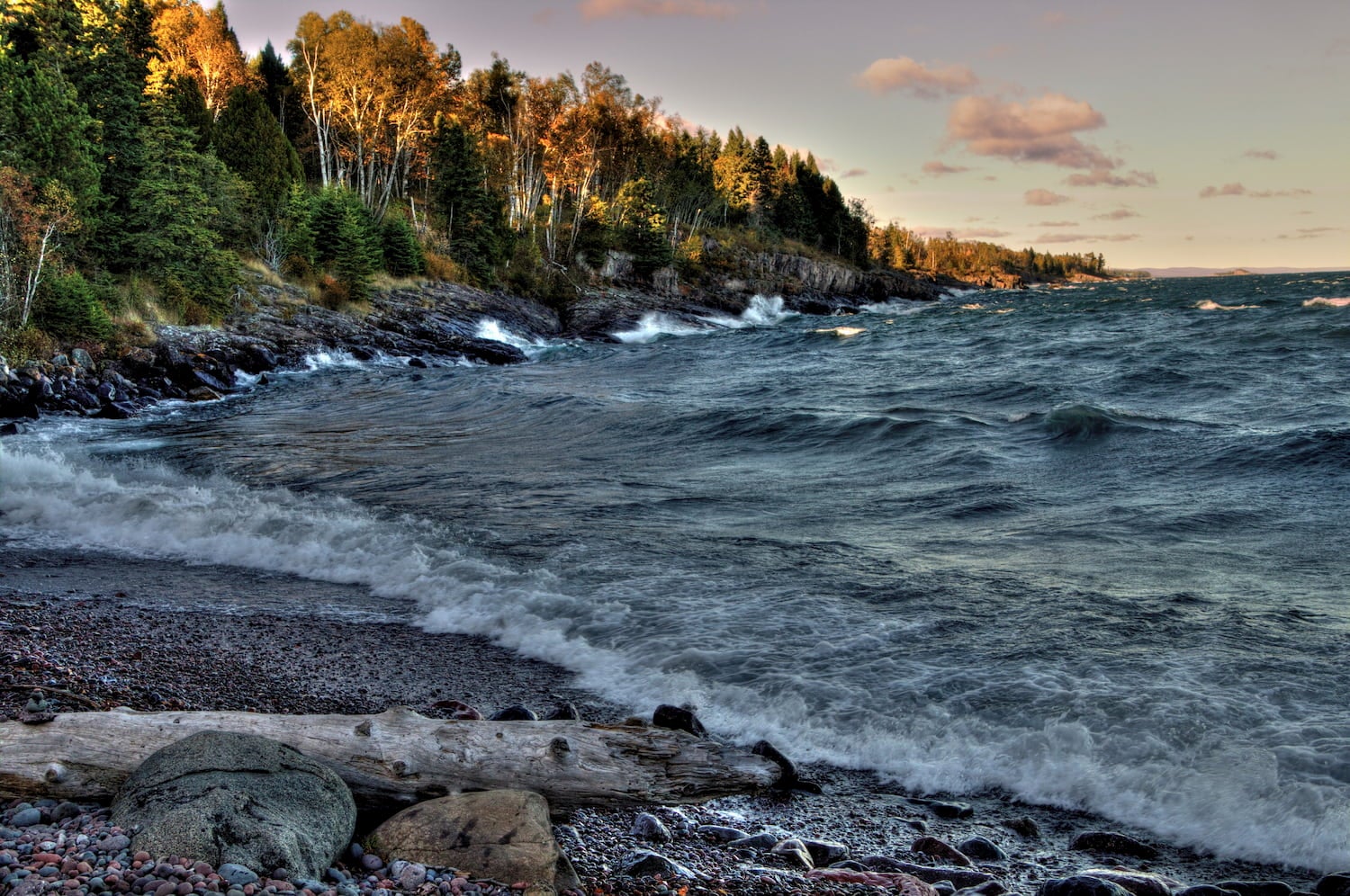 Around 15 miles north of Tettegouche State Park, a beautiful restored cove sits at the site of a former paper company. The multi-colored pebbles on the beach at Sugarloaf Point Scenic and Natural Area represent a vast array of geological eras. There is also an interpretive trail that winds through the site and points visitors’ attention to the unique geology and natural history of the area.

Grand Marais is a charming harbor village along the North Shore of Lake Superior with a vibrant arts and culture scene. Frequently listed among the best of America’s small towns, Grand Marais is home to an eclectic community of poets, artists, and photographers. So, as you might imagine, it’s a fun place to browse through the local shops and art galleries. Take a stroll to Artists’ Point along the rocky shoreline from downtown Grand Marais and it’s not uncommon to see artists setting up their easels and getting to work. The Grand Marais City RV Park is a great basecamp for exploring the town. 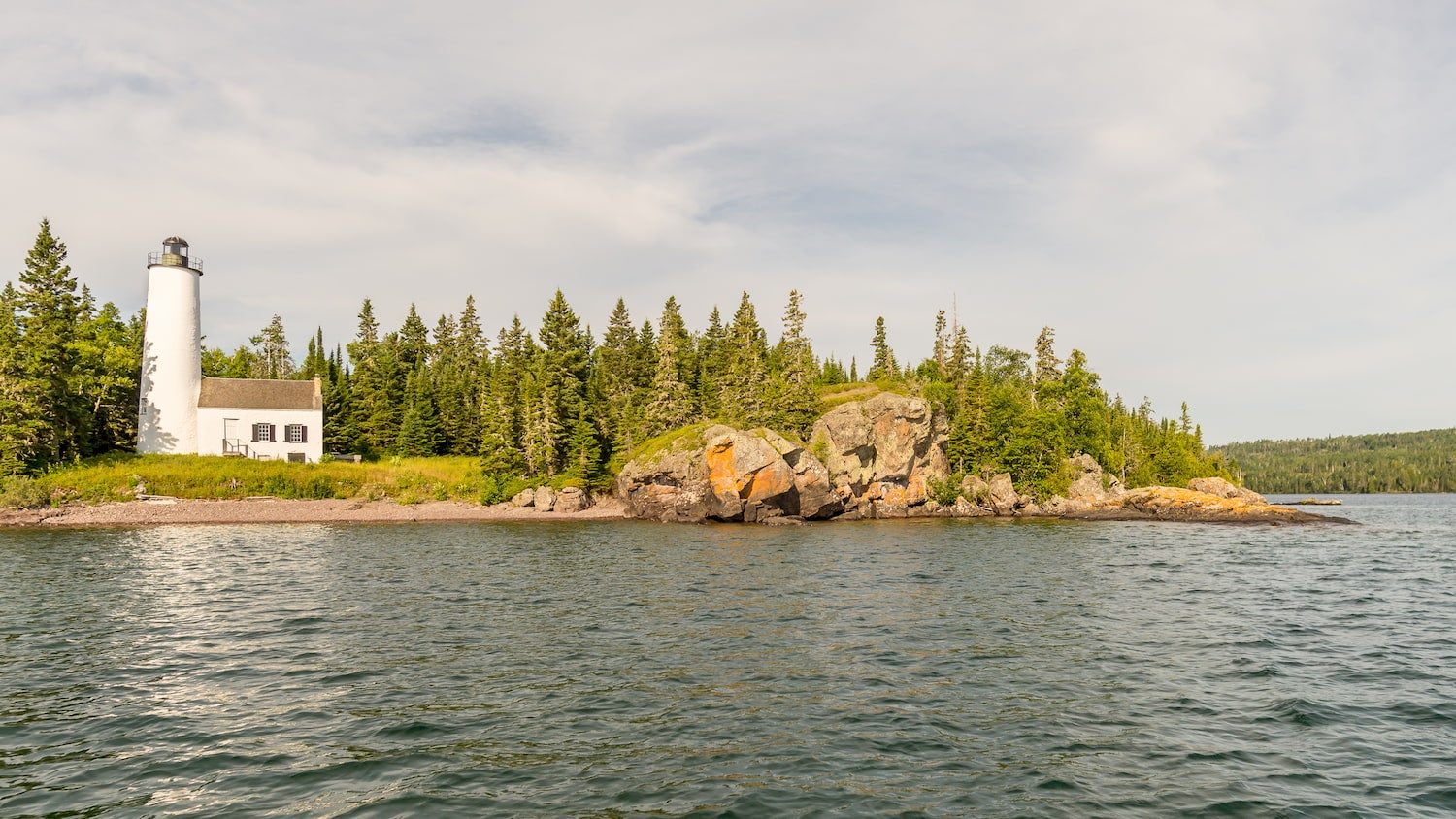 If you have the time, making a trip from Grand Portage out to Isle Royale National Park is highly recommended. Isle Royale is an isolated island in the northwestern corner of Lake Superior and one of the few national parks in the midwest. The park is known for its rugged shoreline, wilderness trails, and unique population of wolves and moose.

Wolf and moose populations were established on the island in the early 1900s and this isolated predator-prey relationship has been intensely studied by researchers the last 50 years. No roads or motorized vehicles are allowed on the island and overnight and day trips are offered from Grand Portage. Check out this collection of Isle Royale camping options that are available on the island.

Located near the border of Minnesota and northwestern Ontario, Grand Portage is named for the 8.5-mile overland route that connected Lake Superior with the Pigeon River and the Canadian interior. Waterfalls and difficult rapids in the Pigeon River made it impossible to travel by canoe, hence the need for a Grand Portage. The Grand Portage National Monument preserves much of the original trail and celebrates the history of the 19th century fur trade and the Anishinaabeg Ojibwe people.